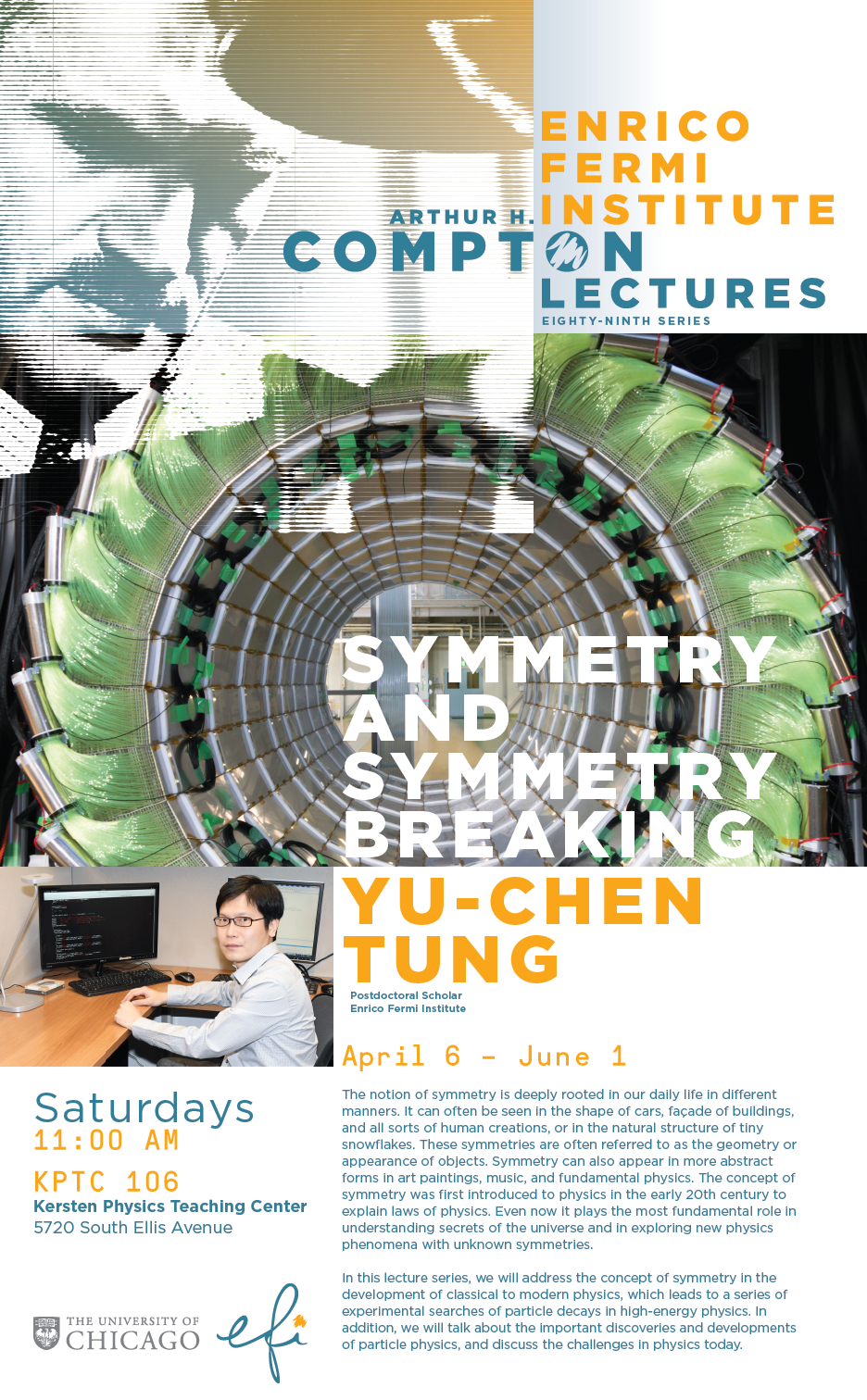 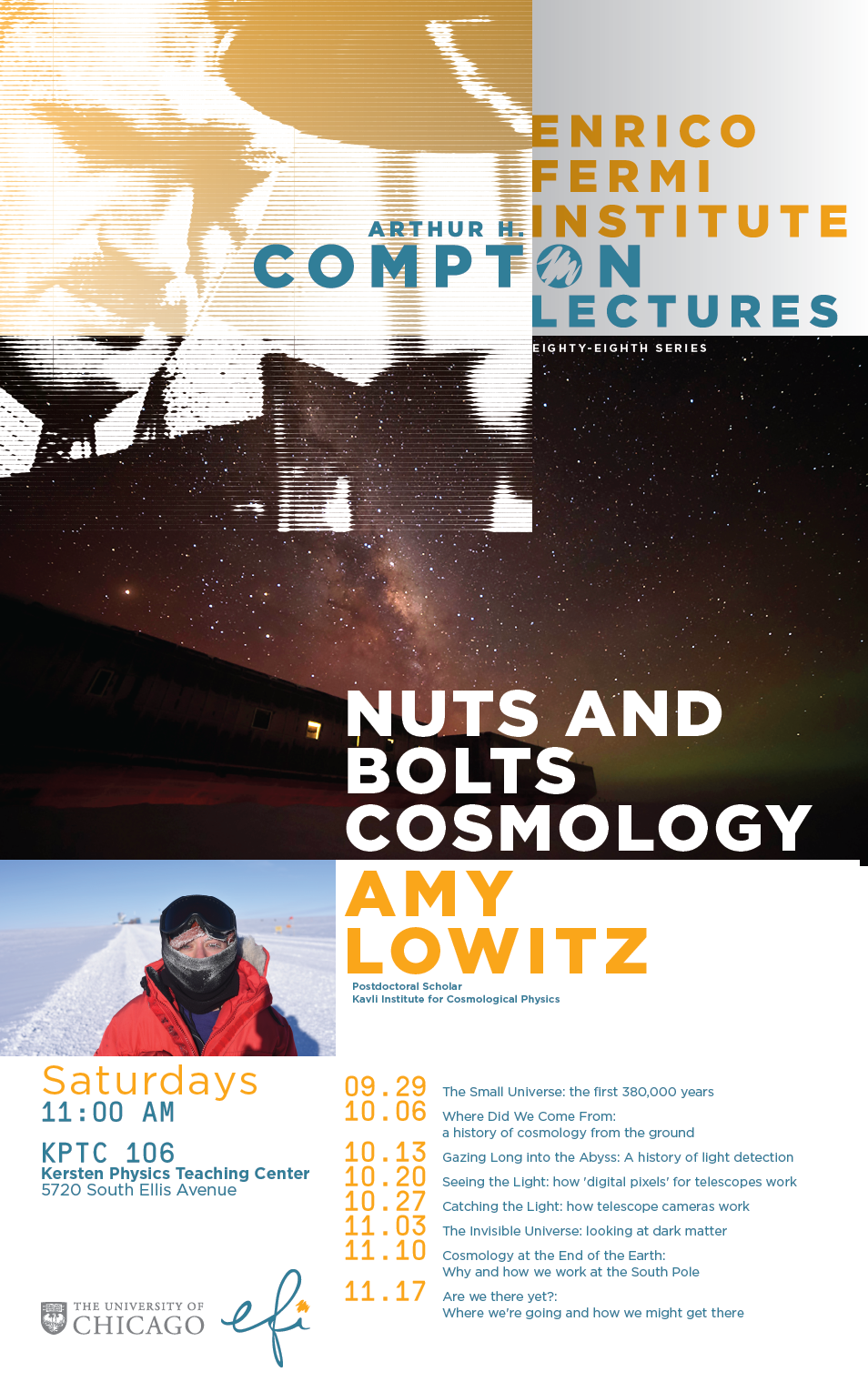 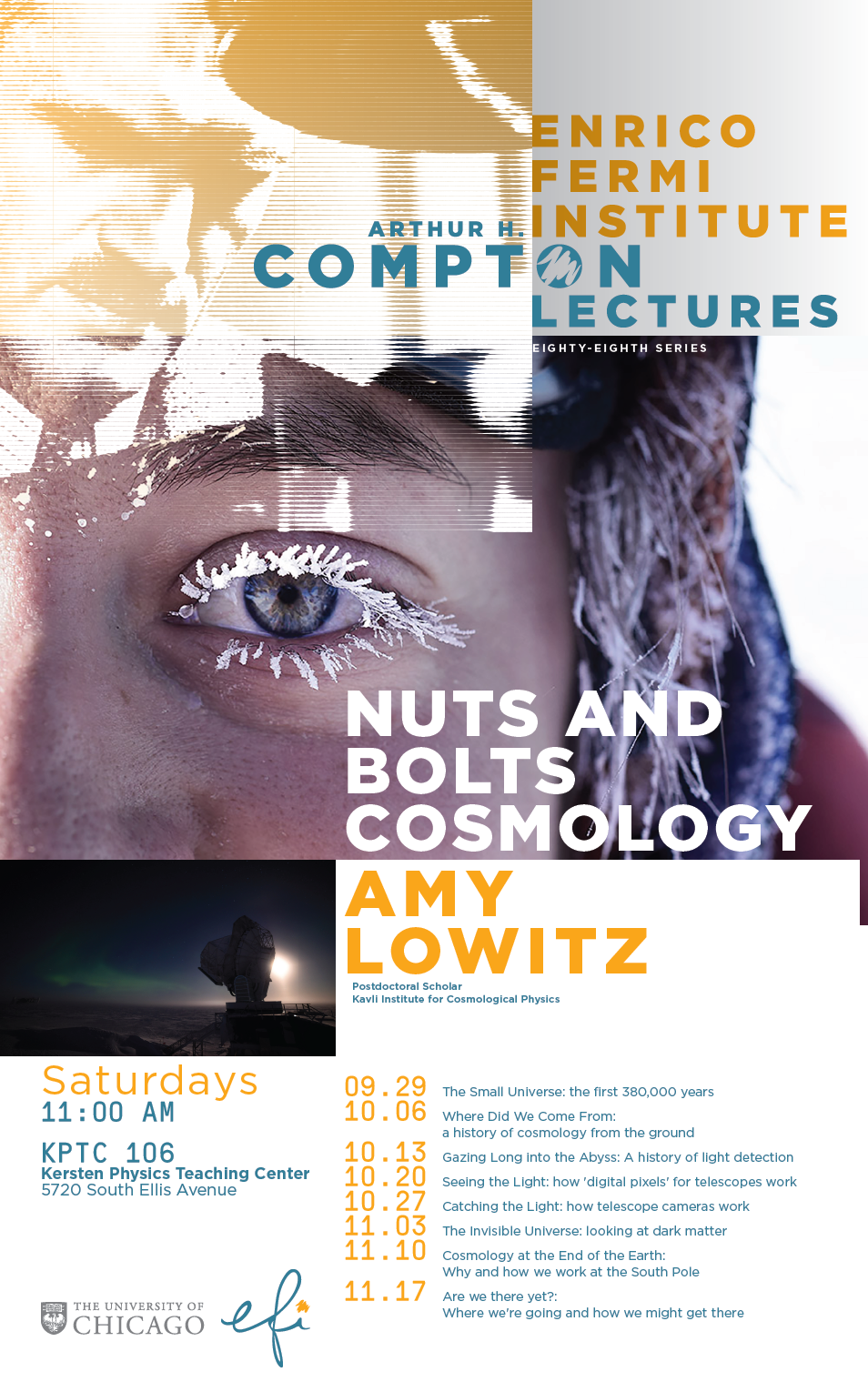 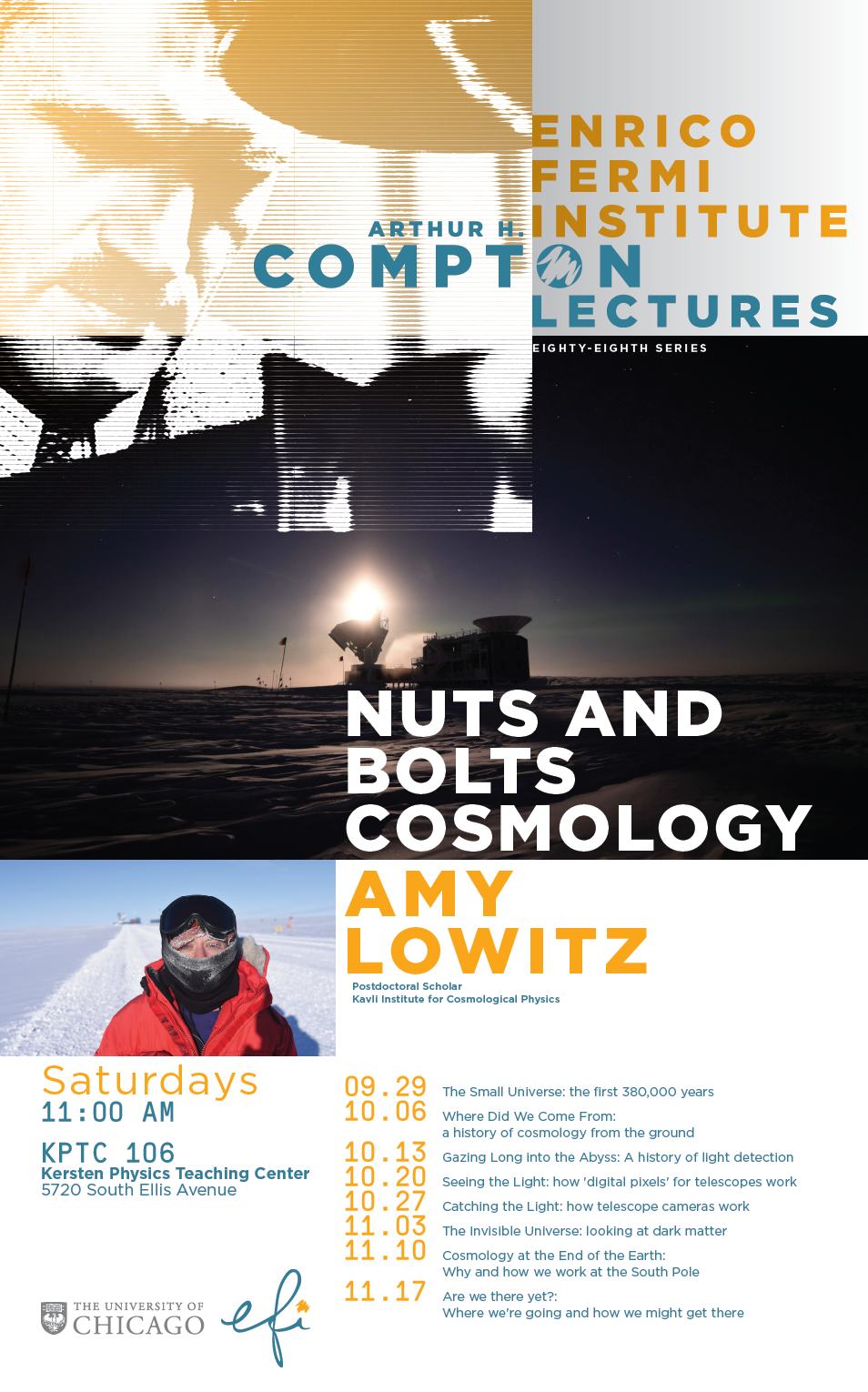 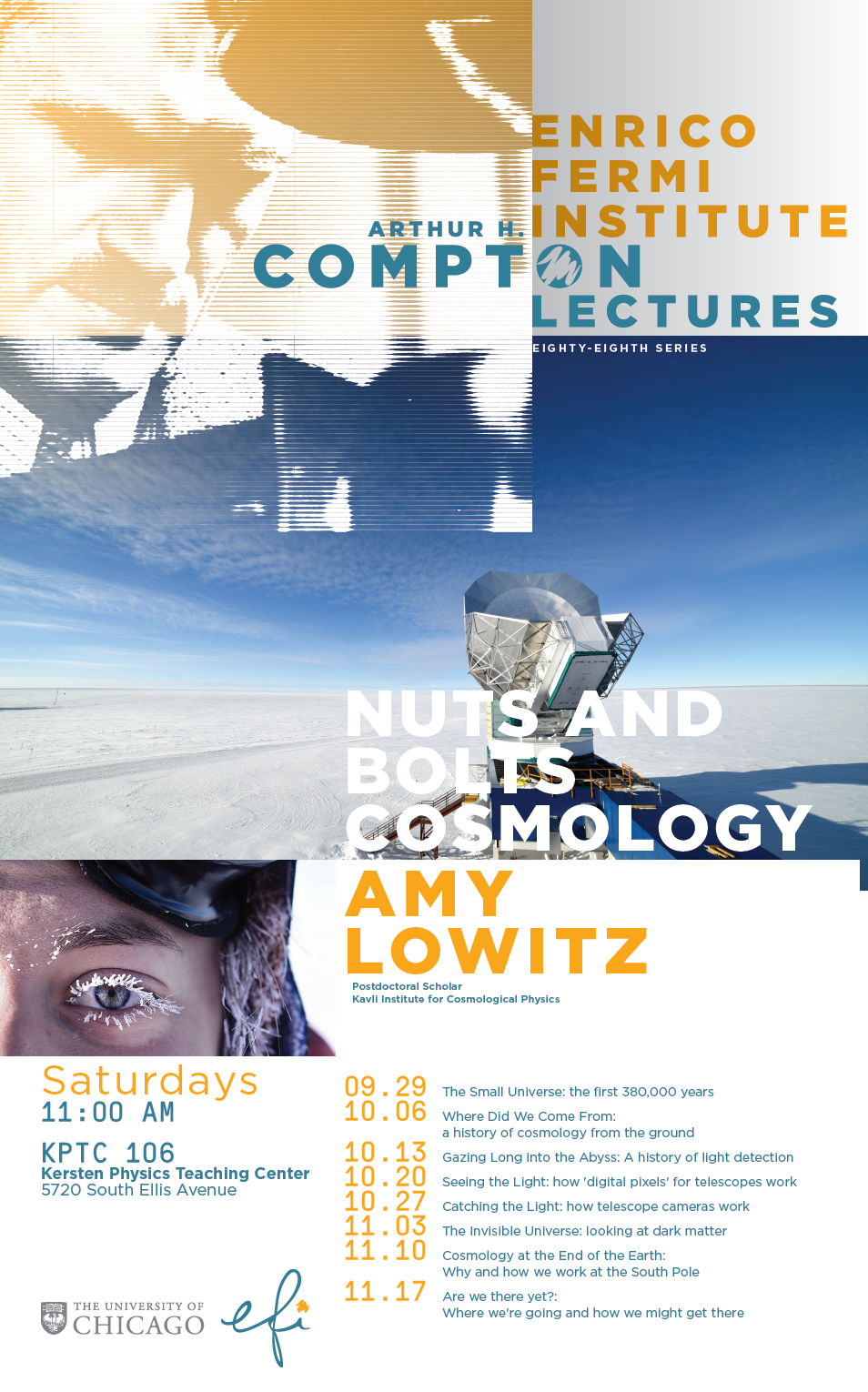 Spring 2018, "The Physics of Neutrinos: Progress and Puzzles" by Andrew Mastbaum

Spring 2017, "How and Why to Go Beyond the Discovery of the Higgs Boson" by John Alison

Spring 2016, "The Soundtrack to the Universe:  LIGO and the Detection of Gravity Waves" by Benjamin Farr

Fall 2015, "The Cosmic Fireworks that Synthesize the Building Blocks of Life: Supernova Explosions" by Manos Chatzopoulos

Fall 2014, "Shining Light on the Dark Side of the Universe" by Tim Linden

Fall 2013, "Dissecting the Higgs Discovery: The Anatomy of a 21st Century Scientific Achievement" by Lauren Tompkins

Spring 2013, "Frustrating Geometry: Geometry and Incompatibility Shaping the World Around Us" by Efi Efrati

Spring 2012, "String Theory in the LHC Era" by Joseph Marsano

Autumn 2011, "Before the Beginning to After the End" by Mark Wyman

Spring 2011, "99 Years of Discovery: What Is Our Current Picture of Cosmic Rays?" by Nahee Park

Autumn 2010, "Particle Physics: What Has It Done for You Lately?" by Joseph Tuggle

Spring 2010, "The Physics of Stuff: Why Matter Is More than the Sum of Its Parts" by Justin Burton

Autumn 2009, "The Physics of Energy Devices" by Eric Switzer

Spring 2009, "From Quantum Mechanics to the String" by Nelia Mann

Autumn 2008, "Stars: Their Life and Afterlife" by Brian Humensky

Spring 2007, "The Quest for Gamma Rays: Exploring the Most Violent Places in the Universe" by Elizabeth Hays

Autumn 2006, "Unsolved Mysteries of the Universe: Looking for Clues in Surprising Places" by Brian Odom

Spring 2006, "String Theory: With a View Towards Reality" by Nicholas Halmagyi

Autumn 2005, "Challenges to Seeing the Invisible: Foregrounds and Backgrounds in the Scientific Exploration of the Universe" by Dorothea Samtleben

Spring 2005, “The Story of Galaxy Formation in Our Universe” by Risa Wechsler

Autumbn 2004, “The Origin of Mass in Particle Physics” by Ambreesh Gupta

Spring 2004, "The Age of Things: Sticks, Stones and the Universe" by Matthew Hedman

Autumn 2003, "Quantum Optics: From the Possible to the Actual" by Matthew Pelton

Autumn 2002, "Pursuit of the New Messengers: Astrophysics in the Extreme Universe" by Scott Wakely